This is where I'm headed graphics-wise with the SawHead project. Pretty happy with it so far, just need to come up with a nice background. 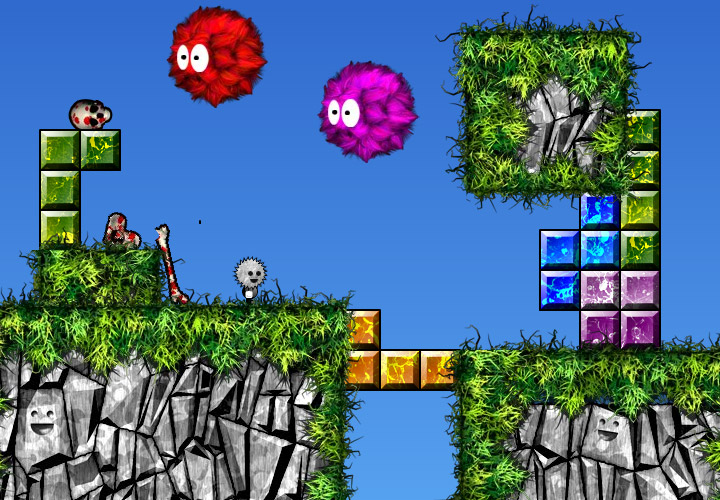 Click the images below to play some earlier versions of sideroller. I really had no plan when I started this project. Basically I discovered Box2D and just started trying out anything I could think of and seeing what felt fun, so these early versions (besides the third one) really feel like different games entirely.

This is the earliest prototype I built. About the only thing I kept from this is the central rolling mechanic and the piles of vegetables. use arrow keys to move, space to roll.

This version was online at sideroller.com for some time. A core mechanic of this version is "telekinetic" mode, which you enter by clicking yourself. In this mode you can draw shapes with the mouse that interact with the rest of the physics world. It was a fun mechanic but I couldn't figure out how to get it to work with everything else.

The ninjas in the second level were my first attempt at making enemies. Their limbs, powered by prismatic joints, move & bounce them around. Eventually I realized it was much easier to use simple shapes for enemies and move them with forces.

Visually I was pursuing a neon-lights at night look; sharp, bright lines over a dark background using vector graphics. I abandoned this after realizing I could create much better graphics using detailed bitmap fills, which also happened to be better for performance.

Things are finally starting to look and feel like the final version. In the "demon" level of this version the flesh texture is animated, adding just a bit more creepiness. Turns out animating bitmap fills really slows down flash. In the final version I had the muscle & guts texture pulse in sync with the heartbeat looping in the background. It looked awesome but I had to cut it to keep Flash from grinding to a halt.

This version also has an ice world. I couldn't work this into the story of the final version (except for the brief glimpse in the space world), but I've got a place for it if I develop a sequel.

Indie Impressions, a youTube channel that reviews obscure, unique games, did a review of Sideroller. I recommend checking out their channel if you're into that sort of thing. They've reviewed some pretty cool looking games I would've never have heard about otherwise.